Men have been in forests forever. And there is no escaping reminders of our presence.  I won’t interfere with a surveyor’s tape but if you pick up whatever trash you can, you won’t ever see it again! You don’t need anyone but yourself to pat you on the back for removing trash. You know it’s gone. The next time you walk there, that trash won’t interfere with your enjoyment. Seeing trash that is out of my reach is very aggravating and I often spend way too much time trying to figure out a solution. But solving that kind of problem is so rewarding! Fellow pickers: keep  up the good work! And Merry Christmas!

My shadow sings the sun’s song!

My back hopes each verse is long!

I do. This is my very old little plastic box. It lives in my pocket at all times(along with my tiny Swiss pocket knife that includes scissors and a screwdriver). I gave the little asprin boxes to all my friends one Christmas, maybe 15 years ago. Guess I should do it again! Good for heart attacks and strokes! 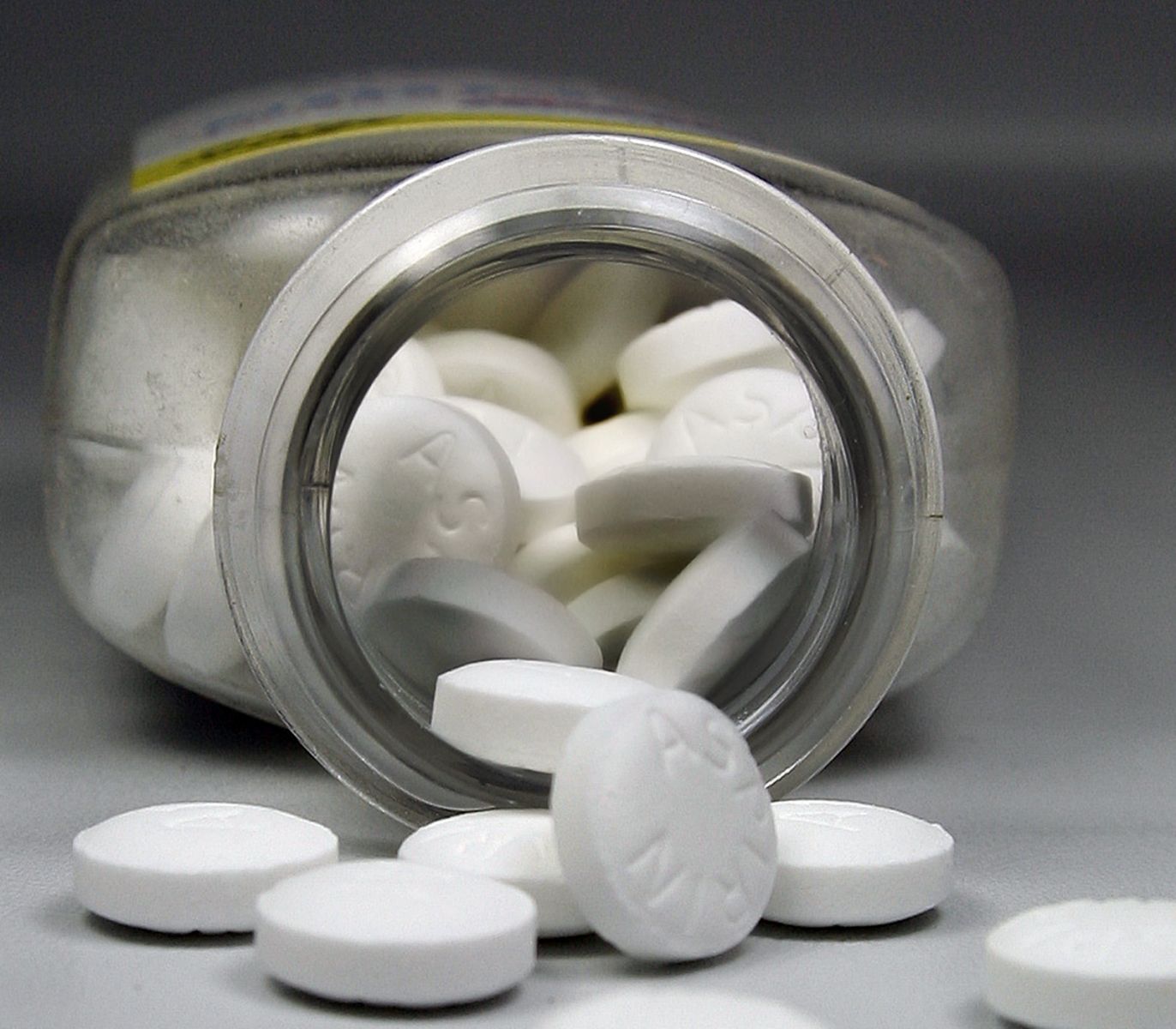 You’ve always been healthy, but you seemed to run out of steam at your wife’s 60th birthday dinner last week. And now your chest feels heavy, as if you’re in a vise. You take some antacids, even though it’s 7:00 a.m. and you haven’t even had breakfast. But you get no relief, and the pain is spreading to your jaw and shoulder. You call your wife, who takes one look at you and rushes to the phone. After calling 911, she brings you an aspirin and some water.

Your wife got it right: You may be having a heart attack, and you need to get to the hospital fast. You also need to get some aspirin into your system quickly — but should you chew the tablet or swallow it?

The reason you need aspirin is the same reason you should call 911 without delay: A heart attack is a dynamic event, and early intervention can limit the damage. The paramedics can give you oxygen and medication, and they’ll monitor your blood pressure and heart rhythm to forestall complications as they speed you to the ER. In the hospital, doctors will take EKGs and blood tests to see if you are having a heart attack; if so, they will usually try to open the blocked artery with an angioplasty and stent or, if that’s not available, with a clot-busting drug.

It’s modern cardiology at its best, and it has improved considerably the outlook for heart attack victims. But how can a humble aspirin tablet add to high-tech medicine, and why is speed so important?

Most heart attacks develop when a cholesterol-laden plaque in a coronary artery ruptures. Relatively small plaques, which produce only partial blockages, are the ones most likely to rupture. When they do, they attract platelets to their surface. Platelets are the tiny blood cells that trigger blood clotting. A clot, or thrombus, builds up on the ruptured plaque. As the clot grows, it blocks the artery. If the blockage is complete, it deprives a portion of the heart muscle of oxygen. As a result, muscle cells die — and it’s a heart attack.

Aspirin helps by inhibiting platelets. Only a tiny amount is needed to inhibit all the platelets in the bloodstream; in fact, small amounts are better than high doses. But since the clot grows minute by minute, time is of the essence.

To find out how aspirin works fastest, researchers in Texas asked 12 volunteers to take a standard 325-mg dose of aspirin in three different ways: by swallowing a tablet with 4 ounces of water, by chewing the tablet for 30 seconds before swallowing it, or by drinking 4 ounces of water with Alka-Seltzer. Each subject tried all three methods on an empty stomach on different days. The scientists monitored blood levels of aspirin and its active ingredient, salicylate, at frequent intervals, and they also measured thromboxane B2 (TxB2), an indicator of platelet activation that drops as platelets are inhibited.

Aspirin can help prevent heart attacks in patients with coronary artery disease and in healthy men over 50 years of age. Only low doses, between 81 and 325 mg a day, are needed. But people who think they may be having an attack need an extra 325 mg of aspirin, and they need it as quickly as possible. For the best results, chew a single full-sized 325-mg tablet, but don’t use an enteric-coated tablet, which will act slowly even if chewed. And don’t forget to call 911, then your doctor. It’s a contemporary update on the old reminder to take two aspirin and call in the morning — and it’s good advice to chew over.

In spite of my poster on Backyard Bees of North America I have not identified this one yet. The poster shows side views of bees, not top down. Plus I didn’t find this bee in my backyard. Oops. I was on the road again.

But I can tell you the flowers are horse nettles . If not, hopefully someone will correct me! Meanwhile, don’t touch them!

Be very afraid! People driving by often stop to move box turtles and sliders out of the road but no one stops to rescue a snapping turtle. What’s not to love?

Perhaps I’ll get my nails done…

Any dinosaur would be proud to have a tail like mine!

My son calls it “the deadly cuteness”…when a creature is totally irresistible- like a panda. To me, a ladybug is the ‘panda’ of the beetle family. If you think there is a cuter beetle, please let me know. One ladybug can eat more than 50 aphids in a day and more than 5000 in a lifetime! They also eat scale insects and plant mites so they are very popular with gardeners. During the Middle Ages, insects were destroying crops. Catholic farmers prayed to the Virgin Mary for help. Ladybugs came to their rescue. The farmers called them “The Beetles of Our Lady” and their current names evolved from there.  The rest of the English-speaking world calls them ladybirds. FYI, boy ladybugs are called ladybugs also.

“Wanders With Worms”, “Dances With Wolves”.. To each his own…

Crisp, cool air and a damp road created quite a traffic jam on Fenwick Road. There were so many worms crossing back and forth that I had to watch my feet for my entire walk. I started to look for other road warriors but realized it was only about 33 degrees, 10 degrees too cold for slugs. So I spent the remainder of my walk thinking about designing hats and coats for the obviously chilly worms. I tried to find out how they survive out of the ground at current temperatures. I found something that said ,” Cool temperatures of 50, 60, 70 degrees F and moist conditions are best for earthworms. Earthworms aren’t active when it’s cold or dry.” As my favorite cousin says, BAHAHAHAHAHA, or something like that. You will just have to imagine me chasing worms around the road with my iPhone.

The sun just came out! Worms can only survive for an hour in the sun! Hurry guys! PS. Did you or a friend come up with the perfect Indian name for you when we all saw “Dancing With Wolves”? Please send me your favorite Indian name.

Lichen captured a swamp maple blossom! This lichen is the kind hummingbirds use to construct their nests. Notice the pale green of the algae on top side of lichen and the white of the fungus on bottom side.

On a rainy Sunday morning I went for a walk, wondering what I would find for my blog. All of a sudden I noticed red swamp maple blossoms scattered on the road like tiny Valentines! Be warned. The sniffles you have may be the start of your annual tree allergies!

I thought the blossom tips fell when caterpillars nibbled on the tender branches. So much for that concept. At least I don’t think there are any caterpillars out yet. Reminder: Winter fireflies were out 01/01/17…

Then I noticed tiny white blossoms on delicious winter cress carpeting the road’s edge! Are we skipping winter in southern Maryland this year?