Lichen may be my favorite winter green. It is an important nest material to humming birds. They cover the outside of their tiny nests with it. Exquisite camouflage!

Lichen captured a swamp maple blossom! This lichen is the kind hummingbirds use to construct their nests. Notice the pale green of the algae on top side of lichen and the white of the fungus on bottom side.

Deep in Chapman Forest, Charles County, MD among the Virginia Pine needles  Pincushion moss and Cladonia lichen grow together. Lichens are not a plant, while mosses are! Mosses are defined as simple plants with the most basic of root structures, leaves, and stems. Lichens are a very different type of creature, called a composite organism. Not just a plant, lichens are actually a single entity created from a joining of algae and fungus. 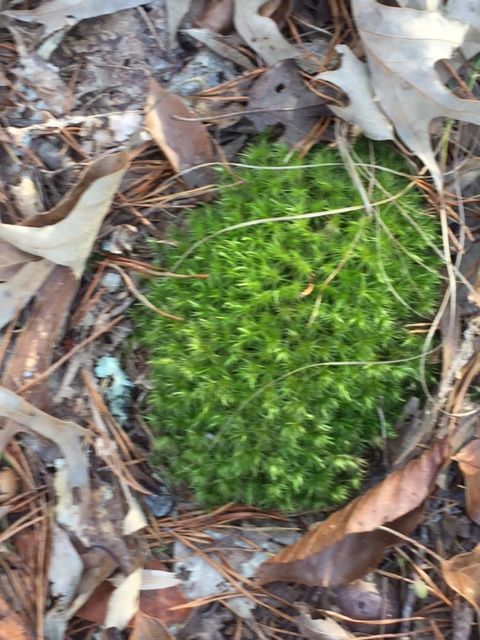 Out of focus but you can see the perfect pincushion shape.

Cladonia looks and feels like something you’d use to scrub a pan! Cladonia is a genus of moss-like lichens in the family Cladoniaceae. They are the primary food source for reindeer and caribou.

This is Hair Cap moss,(Polytrichum commune/Polytrichum juniperinumi).  I thought it was called Star Moss and the pictures I Googled looked similar. But its Latin name is Tortula ruralis. Fortunatey I was with Rod Simmons who knows mosses. I can see that moss identification will be a challenge.

Hair Cap is on the left. I think the lighter moss is also Pincushion but not sure. 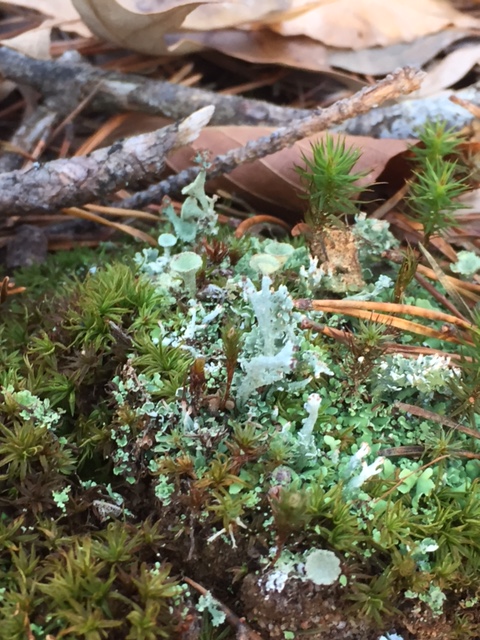 The celadon-colored, flute-shaped lichen are British Soldiers. Cladonia cristatella, commonly known as the British soldiers lichen, is a fruticose lichen belonging to the family Cladoniaceae. They were favorites of mine as a child. These are missing their definitive, very noticeable red hats.